For the past few years I’ve snapped some photos here and there as an attendee at FOWD. This year I stepped it up and covered the event as the official photographer for FOWD NYC 2011. With 2 simultanious tracks, and sometimes harsh stage lighting (we were running between the set of Avenue Q and other shows), it was sometimes a challenge trying to get coverage of everyone and still sneak in enough time to listen to what folks were saying. In the end I had a great time at the conference, think I saw and learned a bunch, and it was a treat to hear every speaker in the lineup (if only for a few moments). I hope the results convey how great of a show Carsonified puts on.

Check out the full set of FOWD NYC 2011 photos on Flickr. 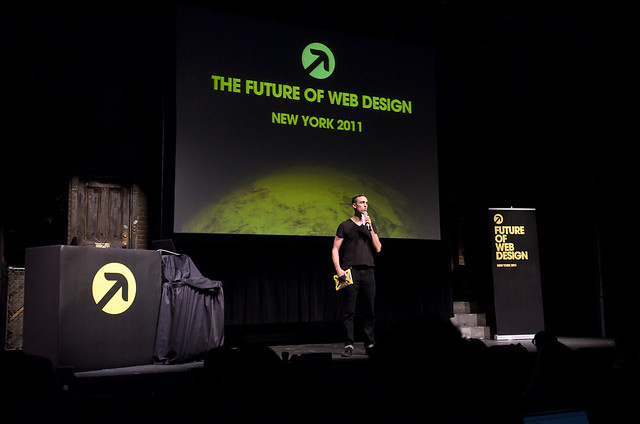 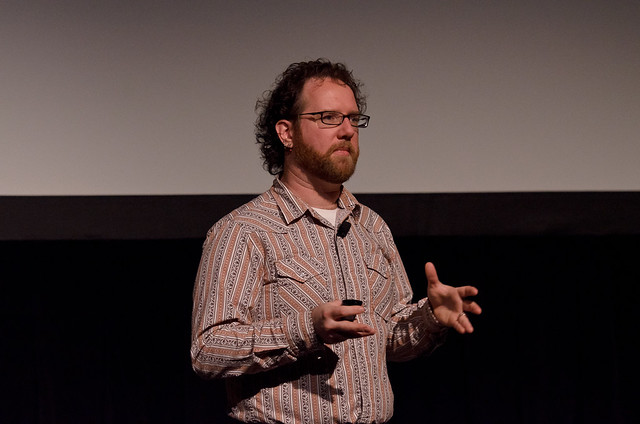 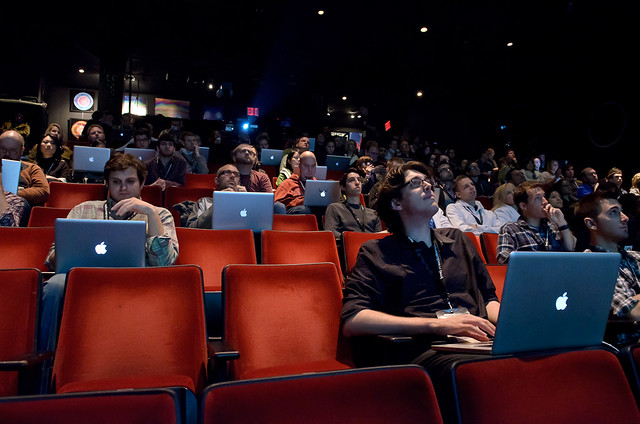 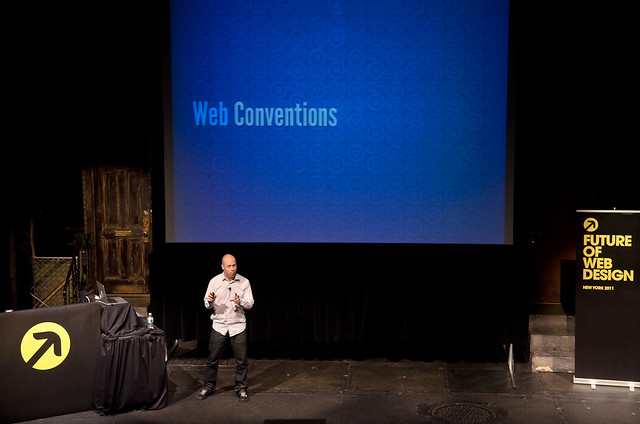 Steve Fisher on the Future of Mobile UX. On the set of Avenue Q 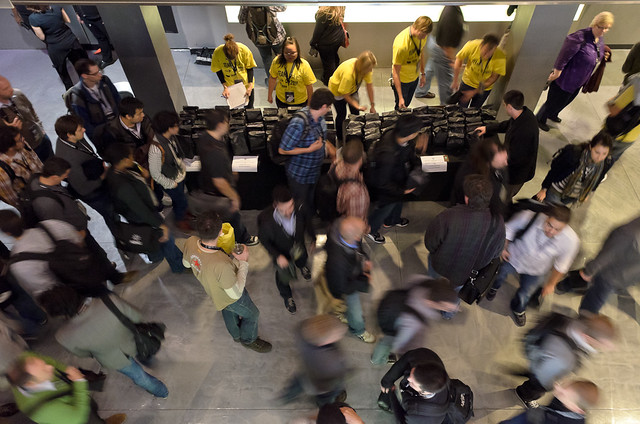 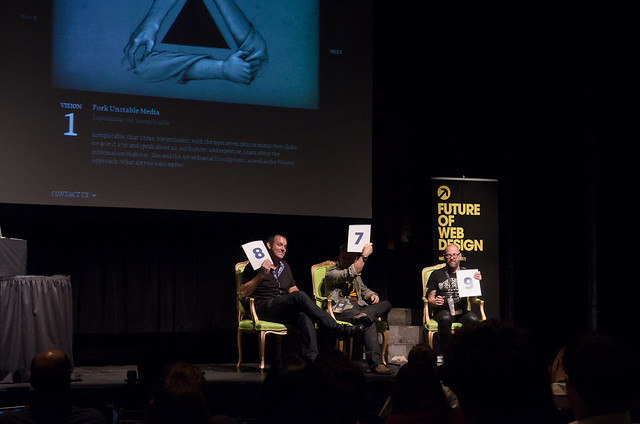 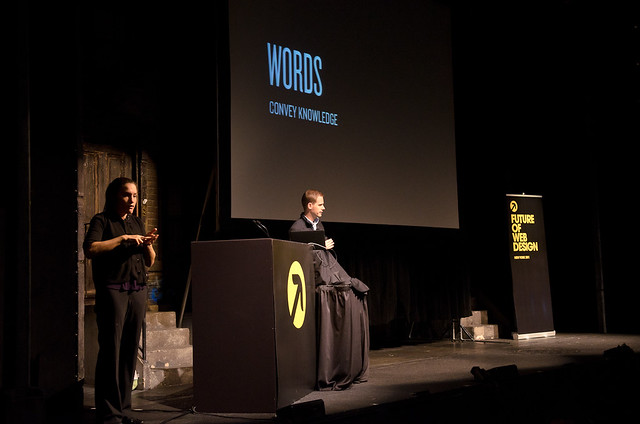 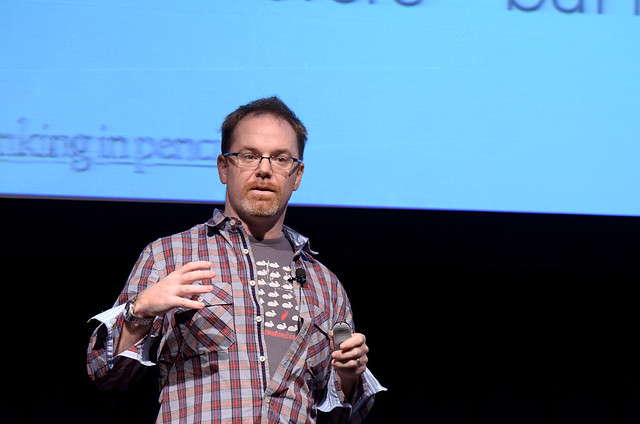 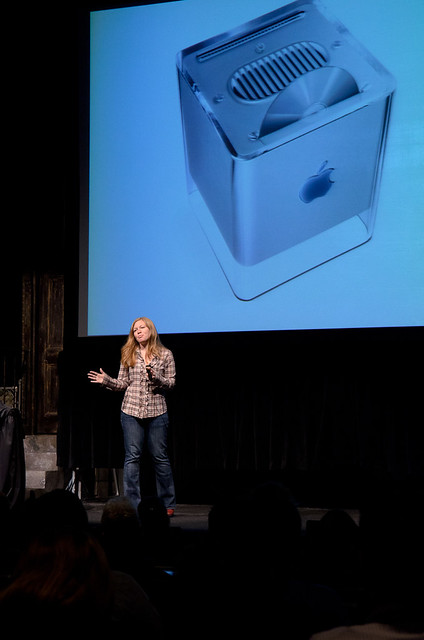 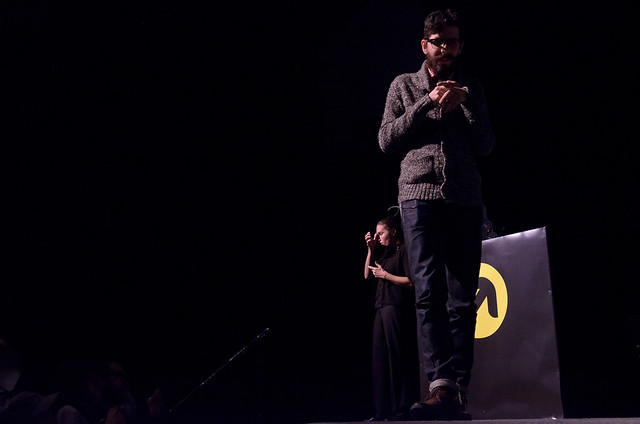 Etsy's Randy J. Hunt on the Future of Branding 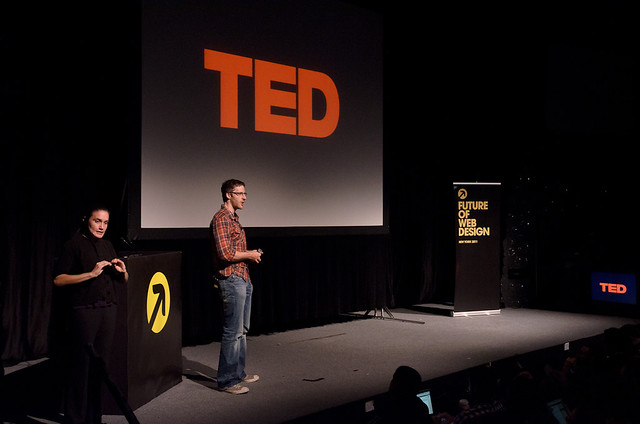 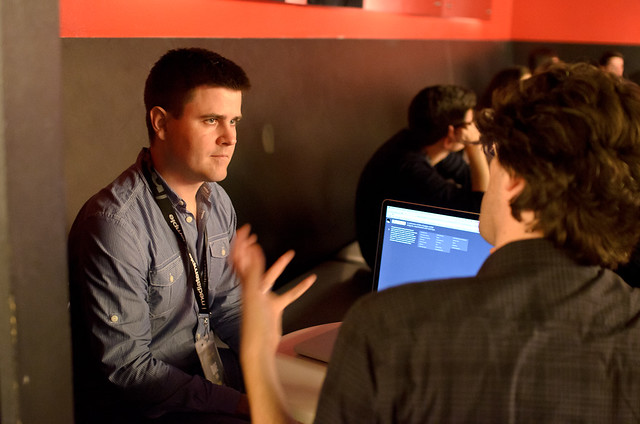 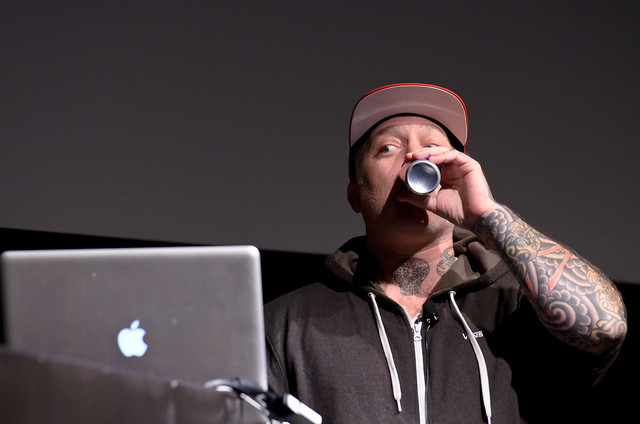 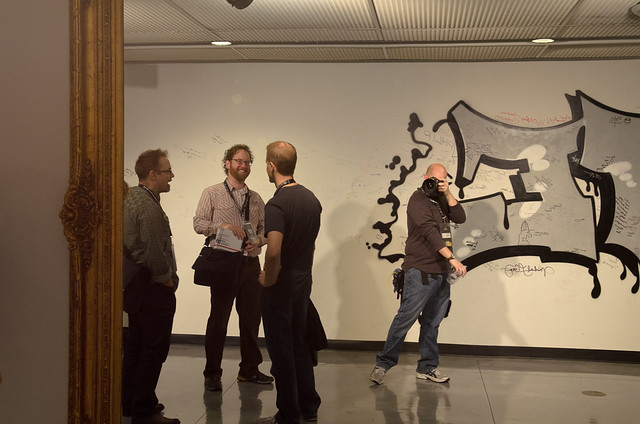 Quick snap of working self portrait in the mirror, starring presenters Aaron, Cameron, and Jason

If you’re in the New York City web design community keep an eye out for me at events — I’ve usually got a camera over my shoulder, in an official capacity or otherwise. Here’s a few sets from other events: 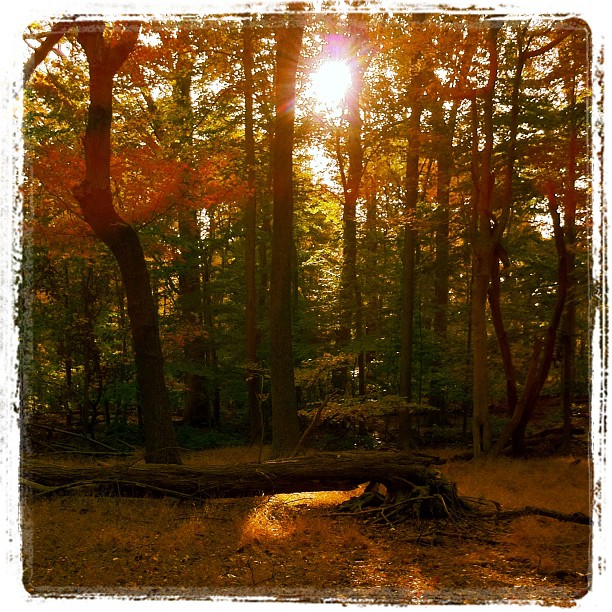 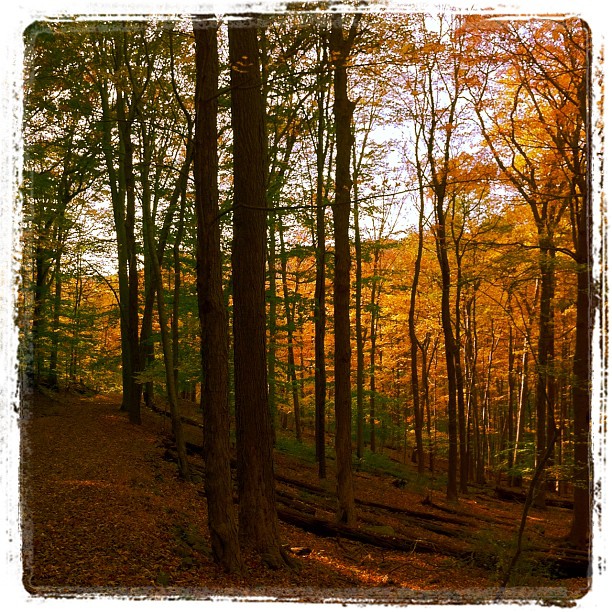 The above photos were taken yesterday in South Mountain Reservation & made 80% more autumnal with Instagram filters. 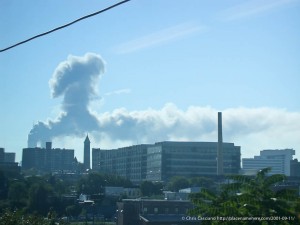 I’ve been commuting to NYC on and off for quite a few years now. Which has put me in the position to see a lot of things, the most memorable of those trips was taken on the morning of September 11, 2001. I had been riding the train to Hoboken, NJ where I would normally then transfer to the PATH train and travel to the 9th street station, near my office. Instead, that morning as we approached Hoboken Terminal, we saw the plume of smoke already haunting the skyline. By the time we were stopped and off the train all public transportation had been shut down and I was left stranded with a ring side seat for what was to unfold that day.

Across The River is my attempt to give a proper, modern, facelift to the gallery of photographs that I took that day which I first published a few days after the attacks, 10 years ago. I’ve not altered the photographs, but have reprocessed them at a more larger resolution, and with the addition of photographs of the NYC skyline before the attacks as well as images of memorials in the days and years since I hope to have been able to add just a little context to the collection.

Visit Across The River 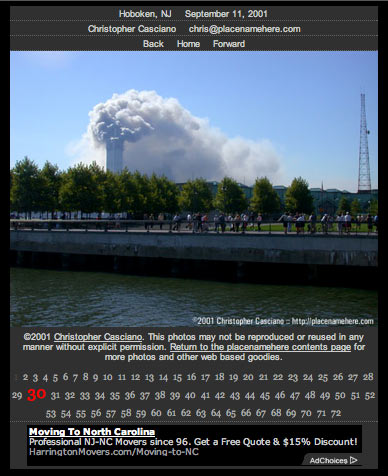 The previous 9/11 Gallery, as published in September 2001

With many groups and individuals using this 10th anniversary of the attacks to pay special tribute it isn’t a surprise that there are others putting together similar collections of images that tell the story of the World Trade Center. I’m honored to have been asked to contribute a photograph to the newly published “FDNY 2001-2011: A Decade of Remembrance and Resilience”. The book is an amazing collection of images of the events and heros of the days following the attacks, put together by the FDNY Foundation, and has a forward written by President George W. Bush. You can purchase the book here.

Just realizing that with the busy Spring I’ve missed announcing a recently launched project that I’m honored to be serving on the editorial team for.

Back in March, Web Standards Sherpa, the brainchild of some of the crew at the Web Standards Project and support from Microsoft, Mozilla, Opera, the W3C, and others, was born. The new site aims to provide guidance on the real world usage of web standards and surrounding best practices through reviews and feedback on existing web sites. Now, with the 10th article published yesterday, I think we’re well on our way down this path of building a great, relevant, and current resource to help web professionals on their journey. Already I am finding that I’m referencing many of the pieces in conversations with clients or colleagues.

The Path We’ve Started On 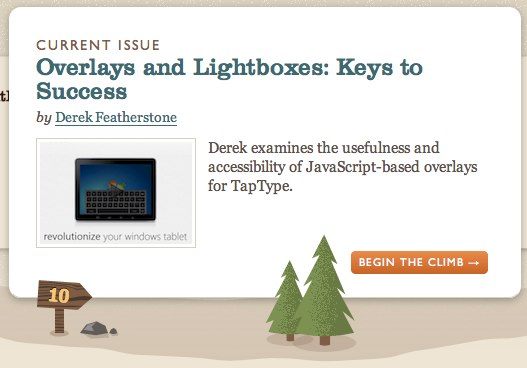 Here’s an introduction to the current staff of Sherpas guiding you and the types of wisdom they’ve been dropping along the way.

Check out the great team behind Web Standards Sherpa and learn a bit more about the project by watching Aaron Gustafson’s talk from MIX11. And if you have a project that you’ve recently launched or that you’re looking to redesign soon and you’re wrestling with a topic such as accessibility, performance, semantics or content strategy drop the Sherpas a line via the submit a site form. Or just come by the site and join the discussion. 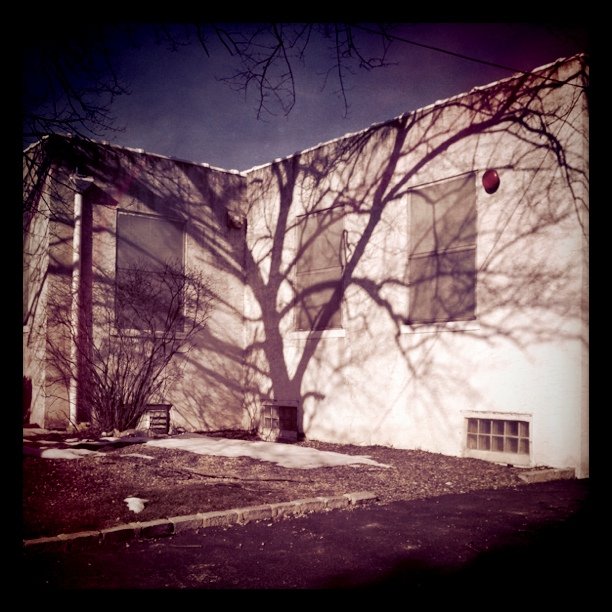 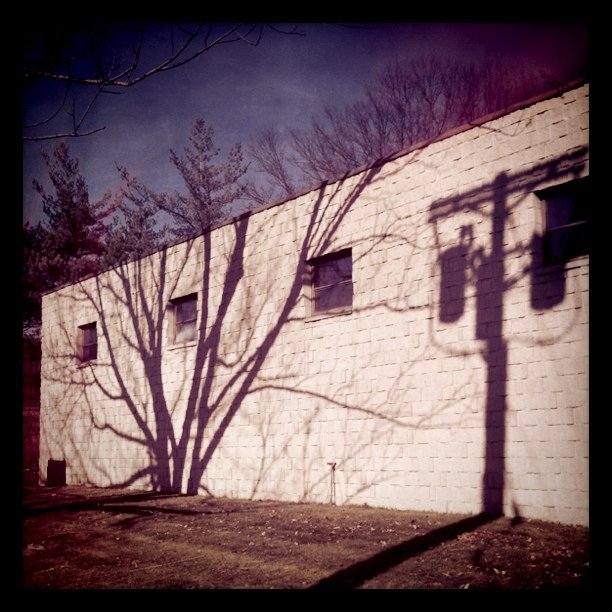 Took off for a walk before a late lunch today and snapped these industrial landscapes with Instagram where you can find me as user placenamehere.