Many photographers on Flickr and across the web have come across Project365 in the last few years. As described by early driving force Photojojo, along with other benefits:

Taking a photo a day will make you a better photographer. Using your camera every day will help you learn its limits. You will get better at composing your shots, you’ll start to care about lighting, and you’ll become more creative with your photography when you’re forced to come up with something new every single day.

I’ve thought about joining in each of the last few years — hey, I already take photos a few times a week, what’s a few more? But that’s why I never have. I already shoot a few times a week, carry one of my cameras almost everywhere and spend more time then most looking around for a potential photo op. In the end I just didn’t think taking more photographs would advance my skills.

Twisting It Around For 2009

So I’m not one to typically make resolutions but I have been thinking about what I do need to do to improve my shooting. And I don’t think its spending more time taking pictures or taking more pictures but instead spending more time taking the pictures and on the pictures I do take. My typical routine over the last two years has been go out for the day and shoot 200 or so pictures and skim through for the 10 or so shots I want to quickly tweak and drop on Flickr. But then I move on and don’t look back or look closer.

So my plan for 2009 is to twist the idea of Project365 on its side a little and try and come up with one photograph a week that I’ve spent some time in the field thinking about and trying a few things to get just right and then coming back and really giving it a good look when I get back in both Adobe Lightroom and Photoshop in post production to make the image the best it can be. Like shooting every day, it should force me to get out regularly, spend time focusing on shooting in the field and coming up with something new. But I hope it also helps me slow down a little, pay more attention, and spend some time really critiquing my work instead of taking a snap and then quickly moving on.

I was at the local park again shooting primarily in two locations along the trail. The pine grove and its long shadows gave me some good candidates for the first week’s image, but ultimately is was the more iconic waterfalls shots that grabbed me. This photo of Black Rock Falls offered some shooting challenges [mix of lighting & harsh highlights] and a lot of things to try. 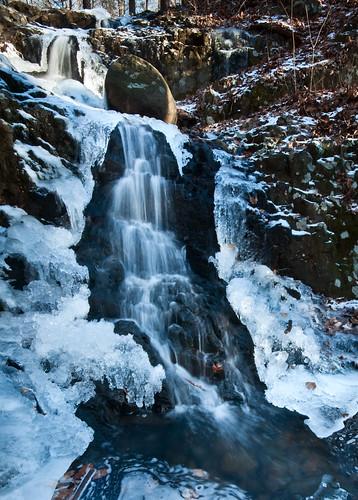 In the end I think the image right our of the camera was pretty good [though unfortunately a little soft] so I didn’t do too much in post, but a trip though LR and PS for a little cropping, brighting of the cascading waterfalls which was in shadow areas and a little cropping made the resulting image something I’m a lot happier with. 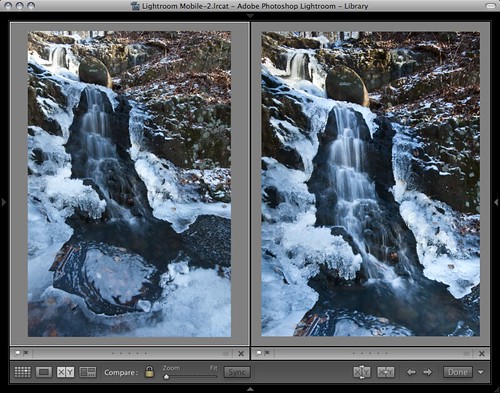 I don’t know if I’ll blog each week’s posting, but you can watch my Project52 set on Flickr to see how I progress and if I keep up with it all year.