Commercial photographer and serial iPhone camera user Chase Jarvis has recently popularized the idea that “the best camera is the one that is with you” in a big way. Armed with a camera small enough that you’re willing to carry it everywhere you become free to capture moments, record mental notes, and other save images that would have otherwise passed you by. Though his weapon of choice is a cell phone camera my weapon has recently been an artifact of a decade ago picked up off of eBay — the Casio WQV-1 wrist watch camera. Though it only takes postage sized [120×120 pixels] black and white images it does so in a way that satisfies my bestcam needs.

Everything about the Casio Wristcam screams ancient technology — from the sub megabit images, to the slow slow buffer, to the infrared syncing of data from the watch to your desktop computer. (Remember Palm Pilot organizers?) 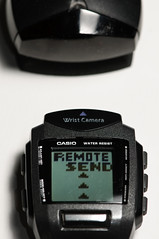 Casio had made a few models of watch cameras in the 90s with this model being the first — later models had quicker buffers, longer lasting batteries and even color images, but the line didn’t seem to last very long. They can often be found on eBay, but fluctuate wildly in starting price.

With all its flaws and having been far surpassed by even the worst of camera phones, the images from this original spy style watch camera often capture the essence of the subject — and its this quick, sketchbook style documentation of an object that I’m looking for when I’m on the go and want to remember a moment for a later, more serious or deliberate photo session.

Following The Best Camera Idea Through

This “best camera” notion is something that I long ago realized and took to heart and has dictated a lot of the style and subjects of my photography a mix of landscapes, observational and local travel style photos. It is also why, on the morning of September 11, 2001, I was carrying a camera on my commute into Manhattan that historic and haunting morning.

Chase has taken so many photos with his iPhone camera that he put together a book of the snapshots, moments and saved images in a recent book entitled The Best Camera and has an iPhone app and photo sharing site of the same name. 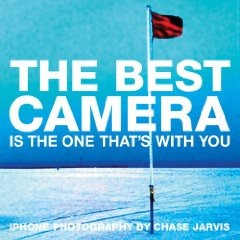 Your own best camera doesn’t have to be a wristwatch or a camera phone — I carry a point and shoot digital camera or my DSLR with me quite often. But if your only camera is one that you leave behind more often then not consider buying something you’re willing to travel with as a compliment.